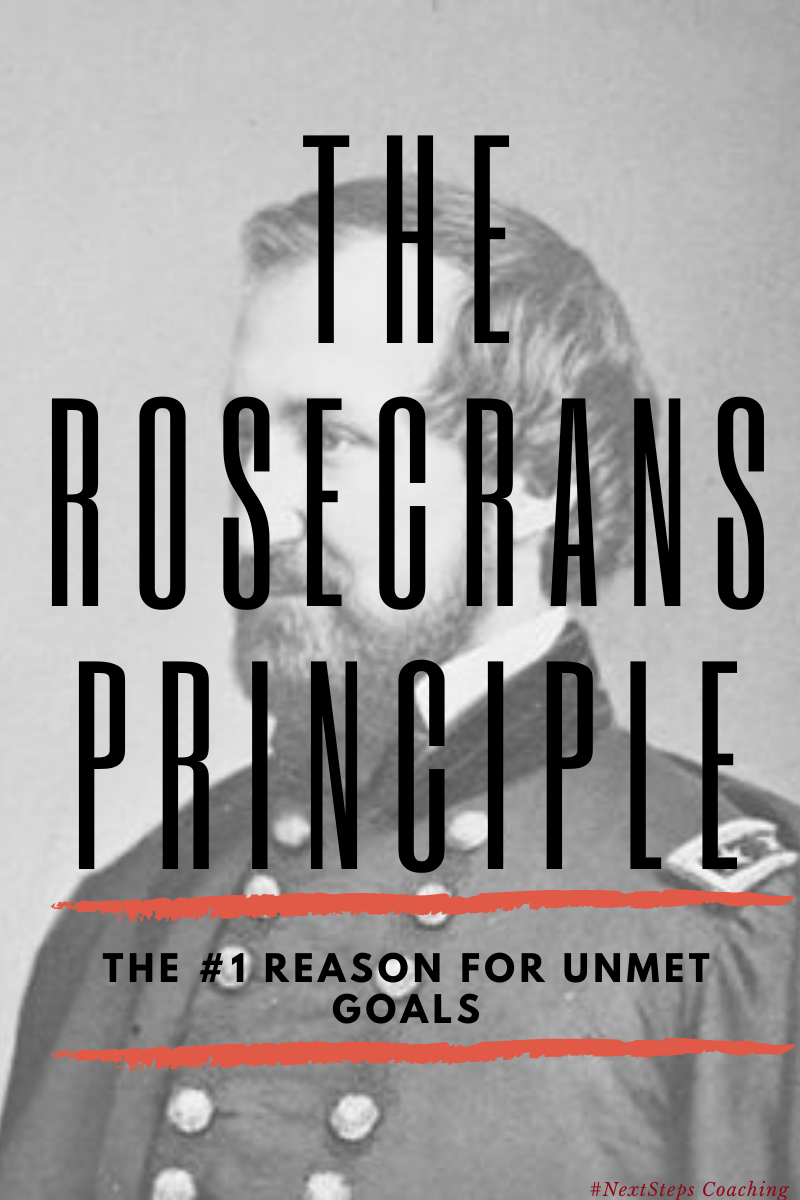 One of the greatest contributing factors to unmet goals and failure is what I call, “The Rosecrans Principle.”

William S. Rosecrans was a major general during the American Civil War. A highly decorated strategist, he often failed to translate an idea into action.

He’s the one that gave me the idea for The Rosecrans Principle.

His superior, Ulysses S. Grant, when writing in his personal memoirs after the war, summed up one meeting this way:

We held a brief interview, in which he described very clearly the situation at Chattanooga, and made some excellent suggestions as to what should be done. My only wonder was that he had not carried them out. (emphasis mine)

What was Rosecrans’ problem? He had a lot of great ideas but failed to take the appropriate action.

As an entrepreneur, business owner, high-achiever, parent, spouse, child, community member, or any other title you carry …. can you relate?

We know we should get out that marketing email, but it’s getting late, we’re a little tired, and it’s easy to push it to another day.

Another scenario: It’s time for some sales calls…except the kids kept you up, you’re hungry, and don’t feel like being rejected should someone say ‘no.’ What do you do? Will you push through anyway, or suffer from The Rosecrans Principle?

Throughout our day, we are confronted with a variety of scenarios, and our outlook determines our destination.

Do we see obstacles or opportunities?

Avoiding the pitfall of The Rosecrans Principle is obvious: take action.

But you knew that, didn’t you?

The problem is not that we don’t know to take action, it’s that we’re scared to.

General Rosecrans himself knew this.

In order to push through fear, take massive action, and avoid The Rosecrans Principle, only one thing is required.

Often, our problem lies with only trying to answer the ‘how’ based questions.

The problem, is that we never answer the ‘why’ based questions?

Why is this important? What’s at stake if I don’t succeed?

As high-achievers, we care a lot about the ‘how.’ We want to know what’s next, and how we can squeeze more productivity out of our time.

But with time, that breeds fear. We fail behind, fail to meet a key metric, become fearful, and everything snowballs out of control.

We have great ideas and can spend a lot of time, like General Rosecrans, coming up with the brilliant plan of attack that will help us.

To counter this, take massive action now just on the how but the why.

That’s where Rosecrans failed. He came up with plans, but without knowing why they were important, he never had the courage to act.

As a result, he fell out of favor with Grant and the Union and slowly faded to obscurity.

Focus on the how and the why.

Between 1861 and 1865, America engaged in the bloodiest wartime moment in its history. The American Civil War, primarily about the state’s rights and the federal government’s role in daily life, dramatically shaped American belief, political life, economic positioning, and future trajectory.

I have found myself increasingly fascinated by this time and the people involved. There are the often-recognized men involved. None is more famous Abraham Lincoln. Widely recognized as one of the greatest presidents in American history, he radically shaped America’s future. He lived as a man committed to a vision of what it meant for people to be free.

Other names play an important role during this time. Ulysses S. Grant became a close friend of Lincoln. After a series of failed generals, he became a man Lincoln could trust to accomplish the mission given to him. Other names like William Tecumseh Sherman and his famous march to the sea that divided the Confederacy gave much-needed victories and morale boosts to the North. Then there’s George Custer, who long before his last stand was a widely respected cavalry hero of the Civil War.

Finally, there are the less famous, but no less significant names that appear. People like George McClellan dubbed the Young Napoleon, who despite his great military genius and insight, was almost solely responsible for the North’s struggles early on. He struggled with taking action when it was demanded. Accounts suggest that had he advanced after an early northern victory the war would have lasted less than two years. Timely action would have saved many of the lives lost during the Civil War. Perpetually struggling with doubt and fear, he inflated enemy numbers as a way to avoid taking action and it cost the North dearly.

My study of these men has not only shaped much of my worldview but fueled the burning desire in me to answer the question, “What does it mean to be a legacy leader?” We remember Lincoln for many outstanding qualities. However, an even more important question is why? He’s not the only one with the qualities we praise in him, he’s not even the only president with those qualities. We could identify many presidents as competent leaders, effective communicators, and strong visionaries. So, what has set him apart? What made him a legacy leader? Well, that’s part of what we want to examine today.

As we emerge from the isolation of COVID and we hope to return to normal, we need legacy leaders now more than ever. So, my goal in this series is to help you understand the world of the Civil War a bit better, what we can learn from these men, and how we can apply it to our businesses today to meet the real needs of our employees, customers, and communities to shape a strong and compelling future.

When we examine questions like, “What made Lincoln the right man for the job?” we discover the qualities and characteristics that we can apply to ourselves that will grow us and our companies. When we understand how Grant seized the opportunity to go from a washed-up drunken, failure of a realtor to commanding general and future president, we discover that these same techniques apply to our world and the opportunity before us.

Similarly, understanding McClellan and his unmatched genius are necessary for us. Great wisdom and insight alone won’t bring victory. We must act. That is where McClellan failed and where we must prevail.

What we see emerge in the time leading up to the Civil War is in many ways a divided America.

Prior to the Civil War, the concept of “American” was somewhat loose. States weren’t united and there was a greater degree of autonomy. That will change after the Civil War, and those four years will prove to be extremely transformative for the men involved and for the country.

We also see that today. America is divided and in need of legacy leaders who can unite it, transform it, and create a compelling future for it. Your presence here today tells me you care about that as well. You want to lead well. You, your staff, your business, your clients, your community. They are all counting on you to rise to the occasion and be a legacy leader and I hope, at least in part, to inspire and equip you on that journey in our time together.

This is an excerpt from a recent talk I gave to business leaders and has been adapted for the blog. For any coaching inquiries related to developing your leadership capacity, please email me.

The free Building With Purpose Conference is only available for a little while longer. To enroll, go here. 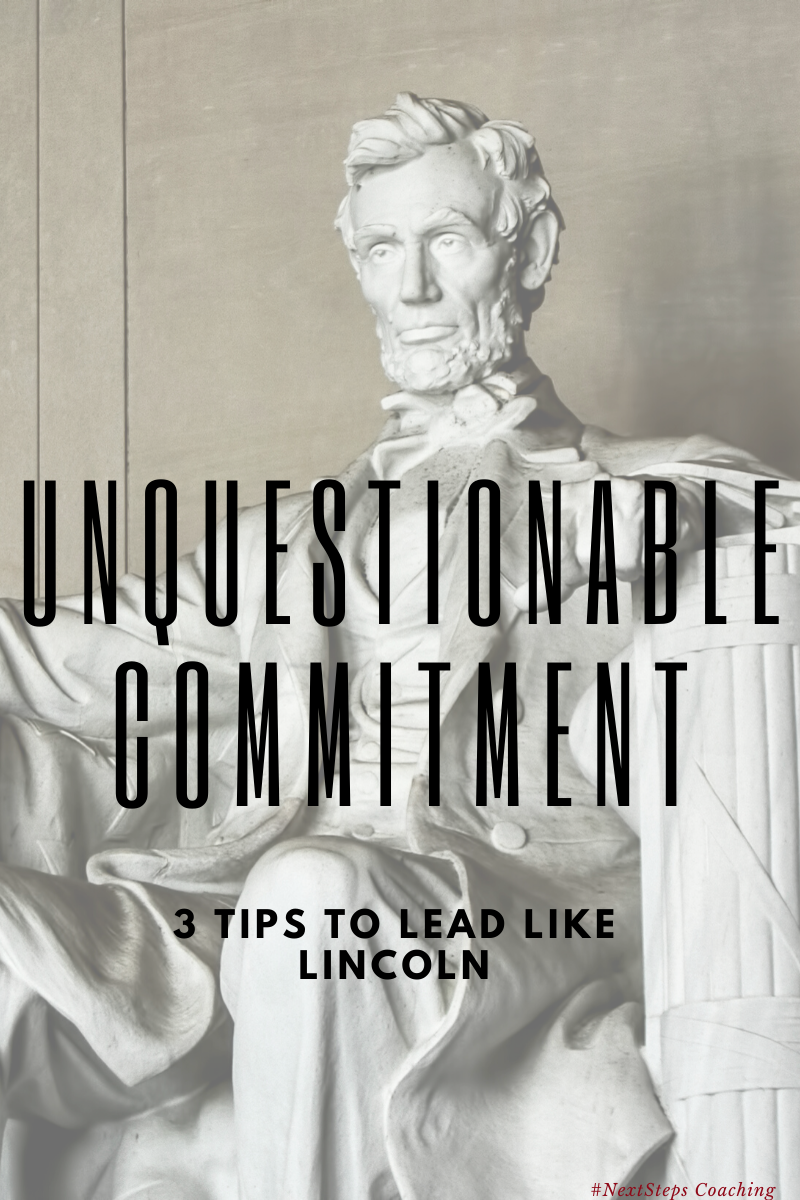 Even as a young child, Abraham Lincoln was a person of unquestionable commitment.

As the story goes, he would sit in his parent’s parlor late at night listening to the conversation the adults were having. At the conclusion of the evening, he would go upstairs to his room. Instead of getting going to bed, he would instead pace his bedroom replaying the conversation. It bothered him that there were parts of the conversation he didn’t understand.

So he would replay it in his head. Over and over. Analyzing every detail until it made sense. Finally content, he could go to bed.

That was a skill that would serve him his entire life.

He became a lawyer because he understood the facts of the case better than anyone else, analyzing the details meticulously.

Widely regarded as one of the great orators of all time, he acquired that skill through his commitment to understand and effectively use words.

In all matters of importance, Lincoln dedicated himself to study, master, and unquestionable commitment.

Much could be said about this level of commitment to our own leadership. At least one report acknowledges that upwards of 49% of employees are disengaged, while another eighteen percent are “actively disengaged.”

Our people, those we have been called to lead, are showing up work in larger and larger numbers disengaged from the work they have been given.

The trend is troubling.

It needs to change.

Change starts with us.

What does our own leadership journey look like? Are we actively engaged in personal our own growth? Do we display the same level of unquestionable commitment that Lincoln did?

Lincoln spent time preparing. Whatever the circumstance or situation, he gave it his full attention. He committed himself to personal mastery and improving the outcome.

Change, personally and organizationally, starts in the mind of the leader. Our mindset, the way we approach not just our day but our every task will determine our ultimate outcome in life.

Those that watch us: family, friends, co-workers, direct reports, all will observe our actions and level of engagement and respond accordingly.

When our words and our actions don’t line up, they will always follow our actions.

Part of what we work on in the coaching relationship is showing up fully present. All areas of our lives must be accounted for. This means we pay attention to the following areas of health: spiritual, emotional, mental, physical, relational, and financial. When we show up, fully present, fully engaged, and unquestionably committed, we see great things happen.

One of the greatest wastes of time and energy is mental distraction. Emails. Phone calls. Text message. Phone notifications. We live in a world that prides itself on distraction. Eliminate them. Close your email application. Silence your phone. Turn off notifications. Better yet, put your phone in another room for a full sixty minutes. Give the task at hand 100 percent of your focus. High-achievers always operate by this principle and it’s what allows them to get so much done in so little time.

When interacting with fellow employees or direct reports, focus on their strengths. As Don Clifton revealed in his StrengthsFinder book, the chances of being ‘actively disengaged’ in work drops to 1% when we focus on our strengths. Eliminate distraction. Then, focus on strengths. This is true for your own, and those of your employees. Improve performance and by focusing on strengths.

Expecting mastery is different than expecting perfection. We don’t expect perfection. We do expect progress. From ourselves, our employees, and from those we lead. Create a plan for intentional growth. Make it clear and compelling. Then make it inspiring and motivating. Expect to master a subject. In short, you gain unquestionable commitment by practicing unquestionable commitment.