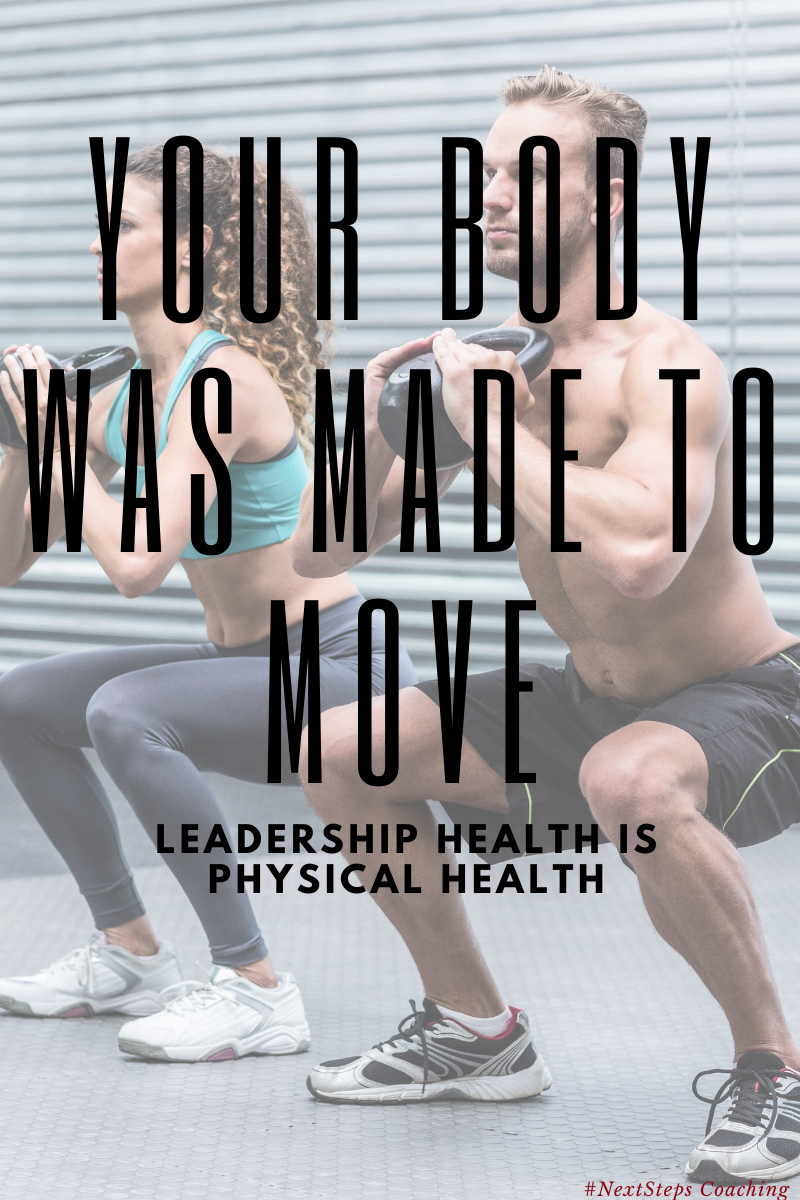 Holistic leadership health includes physical health. Your body was made to move. It not only provides physical benefit but mental and emotional health as well.

Your Body Was Made To move

During my master’s program, I was extraordinarily unhealthy. I honestly stopped stepping on the scale after it read 250, but if I had to guess I got much closer to 260 or 270. I was overweight, had issues sleeping, bought the biggest pants I’d ever owned, and masked my feelings through food.

Shortly after graduation, my family moved from California to Denver and Elise became pregnant with our second child. My sleeping had gotten worse and I literally could not make it through a single day without taking a nap. My weight ballooned closer to 280.

Finally, I had enough. I bought a membership to the local community rec center and hit the weights. I was weak and I was tired, but I was determined.

Soon, after that, I began to clean up my eating.

Along came babies three and four, and new responsibilities at work. The pressure was mounting.

This time, however, I exercised the stress away, rather than attempting to eat my feelings away.

By the time we left Denver to move back to California, I was down over 40 pounds. While 240 was still much too heavy for me, I was on the right path.

Three years later, I’m now a trim 215 and in the best shape of my life. I now find it more of a struggle to not work out than to go hit the weights. My morning routine includes 30-40 minutes of weight training in the morning and a 10-20 minute walk in the evening.

Healthy leaders who care about avoiding burnout take their own physical health seriously.

I know this because I suffered from burnout while being extremely physically unhealthy.

I also know this because I’ve worked with dozens of leaders over the years and have seen it play out time and time again.

If your work schedule consists of more fast food than fitness, you’re in for a world of pain.

Healthy leaders know to move their bodies and stay in great shape. Physical shape and your ability to control yourself around food often say as much about your emotional and mental health as anything else. I’ve seen it enough, it’s almost a guarantee: if you are unfit physically, you’re also likely unfit emotionally and mentally.

There are numerous benefits to exercise. Exercise has been shown to:

Our bodies were made to move. It’s why I added a personal training certification to my coaching packages years ago and constantly work with my clients to achieve optimal health. Our bodies, when not in motion, experience degradation.

Sitting, quite literally, kills you.

Whether it’s taking frequent walks around your office, your block, or your neighborhood, your body is made to move.

If you’re struggling, start small. At my heaviest, I had no grand illusions. I never wanted to “run a marathon” (still don’t!) but I did want to make it to the gym three times in the first week. Next, I tried hard to go three days without dessert. Then, I challenged myself to sleep through the night. I replaced an overabundance of coffee with more water.

Make a small but significant step today to seize control of your health. Call a friend and go for a walk. Eat an apple instead of a donut. Head to bed on time instead of binging your favorite television show.

Each time you intentionally make a stand for your own health, your leadership capabilities improve. More than that, you care for those around you.

People are counting on you to show up, perform at a high level, and influence those around you.

When it doubt, move your body. Your body was made to move!