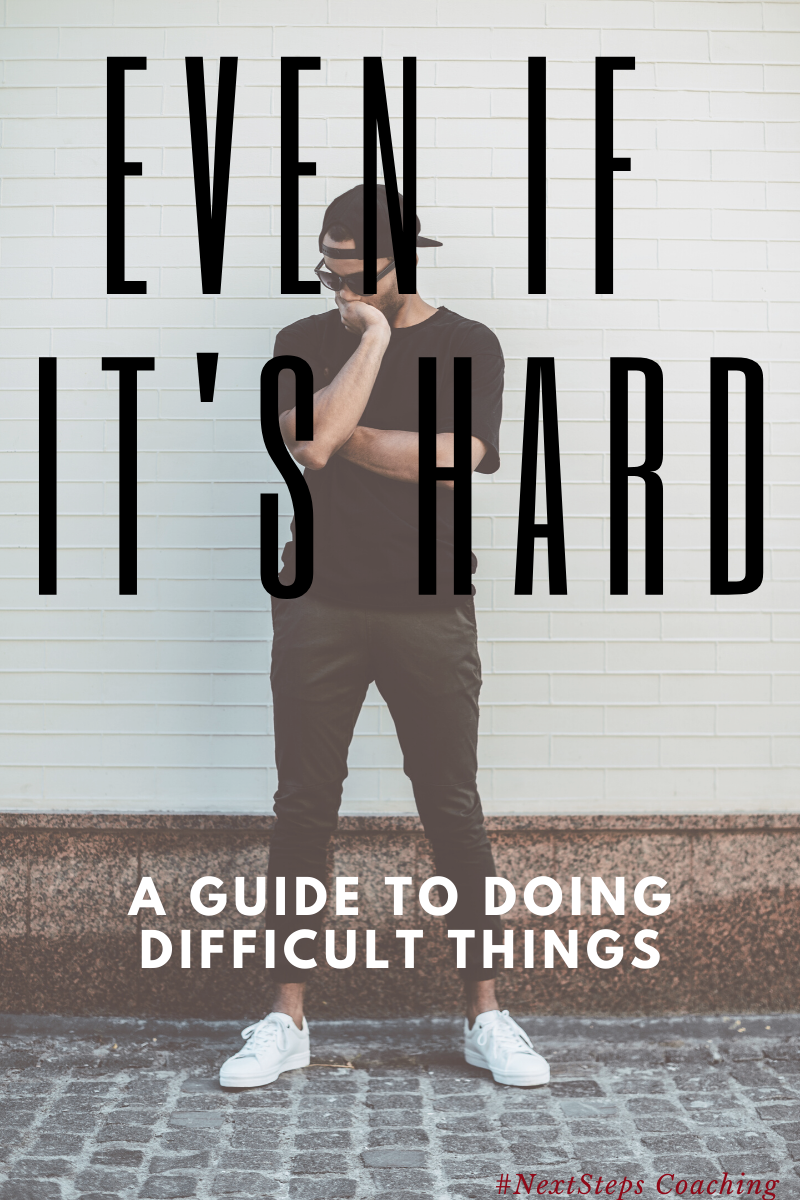 Even If It’s Hard

How do we accomplish a big task, even if it’s hard?

Over the weekend, I was having a conversation with my son about completing one of his tasks for the day. He was supposed to be emptying the dishwasher by himself, and it happened to be particularly full this time.

He didn’t want to because it was hard.

Later that day, he had the same problem with math.

The next day, it was laundry.

Today, we faced it again with a math test.

Ironically, he’s not the only one struggling with that. A year ago, I wanted to quit doctoral school because of the same reason.

Recently, I was talking to a client about implementing change. She gave the same reason why she couldn’t.

“Hard” and its close relatives, “difficult”, “demanding”, and “challenging” all seem to elicit a desire to quit.

That’s true whether you are seven (like my son) or seventy (like my client). Throughout life, we will be tasked with the hard and difficult things. Doubly so in a leadership position.

My guess is, you’ve uttered that phrase once or twice before in your life.

When you’re ready to break through barriers, experience growth, or even if you just have to do it anyway, I want to help.

Three Ways To Accomplish A Task, Even If It’s Hard

Realize All You’ve Done Before

You came into this world unable to bathe, clothe, or feed yourself. You also couldn’t walk, talk, or read. The fact that you’re here, visiting this blog (my sincerest thanks for that one too) means you can probably accomplish most — if not all — of those tasks by yourself.

Less than three months from graduating from doctoral school, I told my wife I wanted to quit. It was legitimately the hardest thing I had ever done. Faced with a growing business and other leadership responsibilities, I was overwhelmed. Deep down, I also knew I had to do it if for no other reason than to set an example for my kids. They will someday be faced with “the hardest thing” that they ever need to do, and I don’t want to set the precedent that we quit when things get hard.

I looked at my track record for completing hard tasks, realized I had a 100% batting average, and stuck it out. Three months later, we celebrated the hard work and sacrifice we all put into my graduation weekend.

Angela Duckworth, in her stellar book Grit, defines grit as, “passion and perseverance for long-term goals.” We’ve all got passion when we start a project. That’s rarely the place we fail.

Instead, it’s the perseverance we struggle with. Having to overcome obstacles, develop creative solutions, and grow in resiliency kills more dreams than a lack of passion.

Once a long-term goal has been identified, strategize key ways to grow in both passion and perseverance. For our son and his need to fold laundry, it’s about the long-term goal of adulthood. My wife and I have always been very open (with them and with others) that our primary objective is not to raise kids. Instead, we are in the process of raising adults. Guess what? Adults take responsibility, own their shit, and do their laundry. Even when it’s hard.

Tasks, especially meaningful and significant ones, can feel overwhelming. The good news is that you don’t have to eat that elephant in one bite.

Distill big dreams and goals into smaller chunks. Then, take those chunks and make them into daily, manageable tasks. Even if it’s hard, you’ll experience growth.

Guess how big my list got? It stayed at zero. For a long time. Until I got over the fact that I needed one hundred thousand people to subscribe. I also didn’t need a webpage, a Facebook page, or a book on the New York Times Bestsellers List. Instead, I focused on getting one. Then another.

Along the way, daily tasks became, “write a blog post” and “Hold a Facebook Live.” Along the way, and at each step, my email list grew.

Now? I’m regularly adding people. While I’m not to my goal yet, I’m closer than I was when I felt compelled to have everything together first.

Plus, the best part? You can totally join this list for FREE. I call it my High-Performers List and it’s full of weekly updates, insights, and the key tools I use with my clients. Just click here to join.

Set goals. Make them actionable. Make them relevant. Make them engaging. Then, make progress. (Because we never knock progress).

While that’s certainly not everything we could talk about, it’s a great start. The next time you (or someone you know) utters the phrase, “But it’s hard” here is how you make progress. Stop the negative self-talk and assess the situation.

1.) You’ve already won 100% of life’s previously difficult battles and you’re stronger because of it.

2.) You have an amazing chance to practice grit.

3.) Distill the goal down to manageable tasks and take action.

You got this. I believe in you. Even if it’s hard.